Seeing others share their stories can often help to clarify our own.

Along with so many others, I resonated with Amelia’s blog post–especially because there are parts about being an athlete with an eating disorder that can make the issue easier to hide under the guise of health and athletics.

It began when I started the raw food diet, of all things. I thought it was the “cure” to my “food problems” because the raw foodists talked about how this diet would end all restriction. They talked about how it could save those who struggled with their relationship with food (it doesn’t). At the time I reasoned that I was “fixing” my disordered eating with a “lifestyle” change in the name of health.

The binge eating and running injuries began later down the road, and this was the biggest thing that prompted me to speak up (I especially wanted the bingeing to end). When my mom offered to get me professional help eight months before I actually did go, I figured I could just help myself–by starting a different macronutrient “lifestyle” diet (*sigh*).

And when I confessed to my coach what was going on, I was sure I would recover quickly. I’m an athlete, after all, I thought. I’m not in the hospital! I’m not “that bad”! I felt that all the things that made me a good athlete would make me recover quickly. I figured I logically knew what was going on and could just make everything work out as it should. I would get back to running well in no time!

I estimated, in 2012, that I was just need a couple weeks of therapy. This turned into years—years of continually figuring out how to trust myself, my body, how to navigate my relationship with running, how to eat intuitively, and eventually reaching a place where I no longer thought about food constantly. 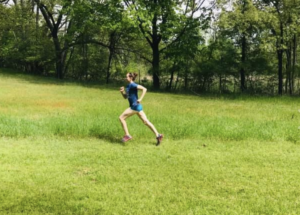 I remember, like Amelia, also hanging on to a piece of my eating disorder. I was half in recovery, half out. As I struggled with my dietitian in the Running in Silence book, I still wanted to continue to run with part of the eating disorder still there, to not fully let go, to keep a piece of it that made me “happy.” To let it all go would leave a gaping hole, and what would I fill it with when all I had known was competing and doing everything in my life for running?

And like Amelia, even in the midst of my eating disorder, I aware of the consequences of under-eating. I followed the MyPyramid app to a T. I was terrified that if I didn’t get enough calcium, or ate just a bit too little (but still restrict myself) I would run into bone injuries. I was very aware, but also very afraid to gain weight. It was a fine line between avoiding injury to still run, but not gain weight because it thought my world would crash.

I thought everything would be lost.

I think having this conversation–especially with a prominent voice like Amelia Boone–will reach more coaches and athletic administrations, too. It will fuel the fire to speak about this more. We’ve seen the impact of so many other stories shared over the years. I know how significant it is to have athletes speaking out.

Each person who raises their voice inspires others to raise theirs.

I get messages from many athletes still afraid to speak up, for fear that their coach won’t like it, or their teammates won’t understand, or that their parents will be angry. It often feels like a place of shame, embarrassment, and uncertainty. It is my hope that more will continue to raise their voices. It’s time to hold power over the disordered eating, rather than the disordered eating holding power over us. 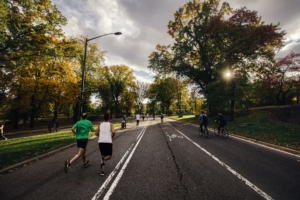 Thank you to the many who have spoken up over the years. It’s incredible to see that there are now too many to count—and the message of the many is something the Running in Silence nonprofit works to share with the athletic community. Your stories are the fuel that fires up awareness, understanding, and the drive to do something about this.

It is my greatest hope that you may find your time to speak up, if you haven’t already. It’s your time to stop running in silence.

For more resources, check out the Resources Page here.

Q&A: “I’m a Runner Who is Binge Eating and I Need HelpR... How Can a Coach Support an Athlete With an Eating Disorder? Paula Quatromoni...