Sarah DeGraff is a Grand Rapids, Michigan native running the Afton 50K Trail Race this Saturday, June 2. She decided to run this race and raise funds for Running in Silence to support bringing eating disorder awareness to more athletes and coaches around the country. Every $1,000 donated helps us reach another group of athletes and/or coaches. You can donate here!

Sarah holds a BA in International Development. She is currently earning her Master’s in Horticulture at the University of Wisconsin, Madison, where she is researching organic vegetable variety trials. Previously, she has worked as an Agricultural Extension Educator with UW-Madison Division of Extension. She enjoys running on the Ice Age Trail and Kettle Moraine trails nearby, as well as gardening, backpacking, hiking, traveling, and biking. 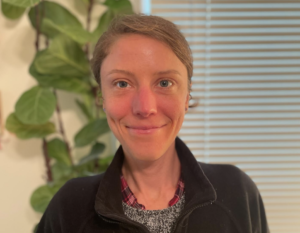 I ran my first marathon at age 27. “Limped through” is probably a more accurate description. Thanks to IT band issues I had throughout training, I wound up walking the final three miles into the finish chute. I immediately signed up for another race, despite my coworkers laughing at me as I hobbled around the office for the following week.

I had fallen in love with the training process of endurance sport.

I am not a traditional athlete. I didn’t join a track or cross-country team in high school or college. Training competitively started about five years ago, when I joined a marathon training team organized by a local running store. When my pace improved, I signed up for as many road races as I could.

Two years later, I moved away from friends and family to work on an organic farm in northern Wisconsin and began to train for my first ultramarathon trail race on my own, away from friends and family. I stayed busy working forty hours a week on the farm plus ten hours of training. The improvements I saw in my running performances added to the excitement. I felt a strong emotional connection to running, identified myself as a runner, and started to win age group awards and place in races.

Away from my running community, I didn’t realize that my idea of training hard was much harder than any of my coaches would have recommended. I was too new at the sport to recognize when it was okay to take an extra rest day or go easy rather than complete a workout. I wound up over-training and under-eating while preparing for my first 100-mile race, and my muscles began to atrophy. I experienced heart palpitations and my hair began to fall out. At one point about a month before my next race, I realized that if I kept going down my current path, I was headed for major health issues and serious, long-term consequences.

But I didn’t stop. I completed the next race, limping to the end with soft tissue damage in my shins. I wound up in physical therapy for nine months, unable to run at all.

My increasing food restriction and continual training not only had an impact on my body, but in all areas of my life. I stopped hiking, biking, or doing plyometrics – any exercise besides running because I had to save all my energy for that day’s workout. I stopped reaching out to friends online and didn’t leave my apartment except to run essential errands. I would go to bed before 8pm because I was so exhausted.

My world continued to shrink. I was depressed and anemic. I had high anxiety and couldn’t concentrate on tasks at work. My thoughts continually returned to food – when could I eat next? What would I eat? How many calories would it be? How many calories had I already had that day? I was already restricting macronutrients for fear that eating fat would make me “fat.” But when I started to severely reduce my carbohydrate intake and subsisted mostly on fruits and vegetables, the wheels fell off.

At this point I still didn’t understand that it was a lack of proper nutrition that had caused my injuries. I completed another round of training for ultra-distance races while my weight plummeted again. This time, my parents visited me during peak training and saw my deteriorating physical and mental wellbeing. They recognized the signs of not just over-training but my unhealthy attitude towards food and my intense fear of gaining weight.

I constantly talked about how I was gaining weight and was “fat” – clear evidence to them of serious body dysmorphia, as I was at a low weight. I wouldn’t eat anything but fruits and vegetables. And I talked constantly about food. No one mentioned the “A” word, but when I looked up symptoms of anorexia, I had 90% of the signs. Even then, I couldn’t admit to myself that I had an eating disorder, despite recognizing that I no longer had control over what I ate and that something else was mandating continual, increasingly-restrictive eating.

I decided to go to a therapist who specialized in eating disorders because I knew my obsession with food and my fear of it was not normal. Finding her took some effort on my part – I was in a small community with few options available, and I had to look not just for a therapist but one who understood my complicated relationship with food and could help me navigate through disordered thinking.

Today, I am still in recovery. I have a team of mental health professionals and a nutritionist that works with me to guide me towards a healthy, positive relationship with food. I’ve realized that food is not the enemy. Food is the fuel my body needs to achieve the tests of endurance I put it through regularly. When I deprive myself of food, I sacrifice my optimal athletic performance, which is the opposite of any athlete’s goal.

Still, it’s hard to look in the mirror. I try to remember that, just like a broken arm needs a cast to heal properly, my body has been through trauma and the weight I’ve gained is the evidence of a body in recovery.

I also struggle with my relationship with running. Something that once brought me so much joy and satisfaction and allowed me to test myself and persevere became warped when food became my enemy. I began to fear workouts and long distances. Something in my mind fought me every time I tried to get out the door to exercise. Likely it was my body’s instinctive response to Low Energy Availability (LEA).

Many athletes don’t to return to sport after recovery. I certainly struggle to get myself out the door. Some days I just can’t do it. But as I continue to treat my body well and nourish myself, running has started to feel the way it used to – a positive experience, a way to push myself and grow stronger.

As I re-learn how to nourish my body, I’ve noticed how much faster I recover from workouts and long runs. I have energy to do other activities I enjoy, like kayaking and hiking, or even just walking to the store rather than driving or staying home. When I converse with others, I’m in the moment rather than worrying about the next time I’m allowed to eat something.

Reconnecting to community has been a major influence on my recovery. My parents have been supportive of me throughout the process. Even so, I had to communicate openly with them and tell them what my triggers were. It was difficult to be honest and vulnerable with them even though they are on my side. Being open with them and knowing that they will never do something destructive like force me to finish what is on my plate or commenting on my weight has allowed me to take many steps towards a full recovery.

Surrounding myself with friends who have a positive relationship with food is helpful as well. One friend, who is also an endurance athlete, eats intuitively. The healthy relationship he has helped me to see what healthy eating should be. He eats when he’s hungry, stops when he’s full, doesn’t place any foods off limits, and makes sure he eats enough to replace what he’s lost during a workout each day. His dedication to proper fueling and to training shows up in his performance.

Seeking out a therapist is a great start on the path to recovery. So is talking to a nutritionist. But neither of these relationships is enough. It is also important to reach out to people in your life who care about you and let them in on your daily struggles.

No one is perfect, and no one relationship will fulfill your need of support as you walk the path to recovery. For me, it was my parents and some close friends who were my biggest supporters. You may find that a coach, professor, teammate, sibling, or other family member works best for you. I found that talking about what triggered me helped them to avoid saying certain things around me until I was able to work through that obstacle.

Once you figure out what kind of support you need most, ask for it from those you trust. I found that talking to people who have either had an eating disorder or who were in a close relationship to someone who had one was most helpful to me. Even reading about others’ experiences online or their autobiographies was useful because it helped me realize I was not alone. I saw that other people have gone through this and come out the other side. It also helped me know what to expect in the recovery process.

Ultimately, though it may not always feel this way, your recovery is in your hands. No one can do it for you. But that certainly does not mean you should try to heal on your own. The people in your life who care about you will most likely support you – but you must open up and ask for their help. Asking for help and being vulnerable about your eating disorder may be one of the most difficult things about the healing process. It certainly was for me. But the relationships with those who know and have supported me through this have only been strengthened, and through their kindness, I’ve been able to heal.

An Athlete on Another Team Looks Underweight–What Should I Do? Dr. Paula...
Scroll to top