Rachael Steil, author of Running in Silence, is a nationally recognized eating disorder recovery speaker, cross country and track coach, 2010-11 All-American runner, and the recipient of the Aquinas College Outstanding Young Alumni award. She has presented at coaching clinics, conferences, schools, and colleges with powerful stories of honesty and hope. Steil has appeared on The Dr. Nandi Show, WGVU’s Family Health Matters, and in Vogue Magazine, U.S. News & World Report, Women’s Running, and has written for Runner’s World and Techniques magazine. Reviewed as a forthright, relatable speaker, Steil inspires coaches, athletes, or those in recovery to recognize a problem, speak out, and create change.

All proceeds from speaking go to the Running in Silence nonprofit.

“Your talk truly has impacted me. I have never felt more heard or understood in my life regarding my relationship with food and disordered eating. Thank you so much for creating a safe space for others with similar stories to feel heard.”

“Rachael was engaging and inspiring. She has done a great job of sharing her story without being triggering to those suffering and inspiring hope in the entire audience!” 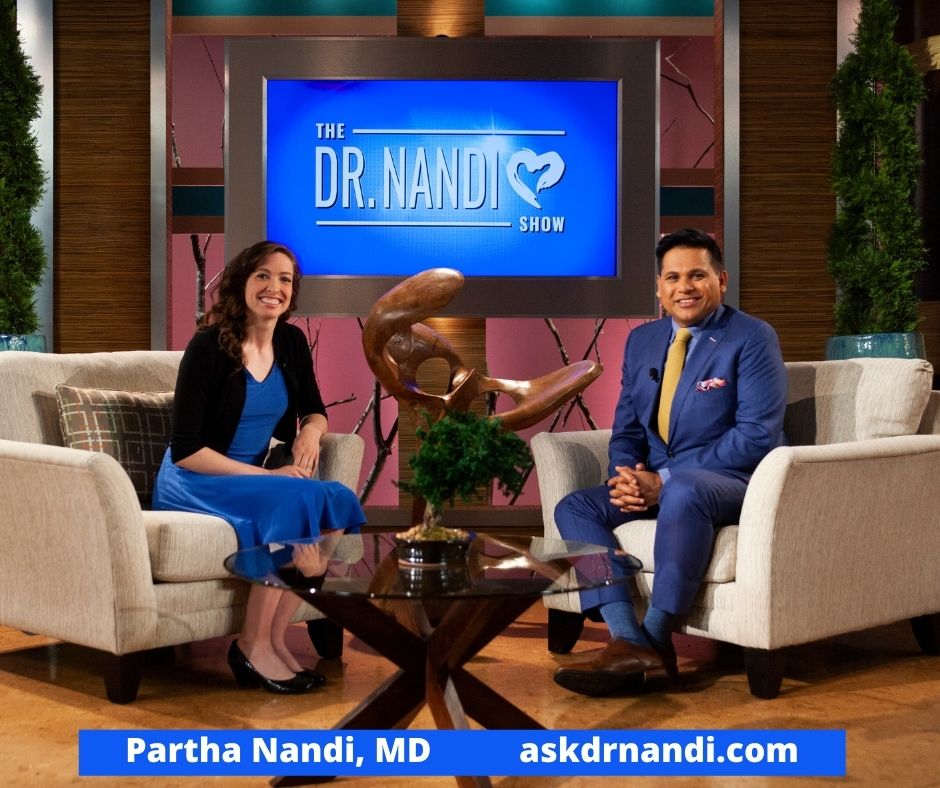 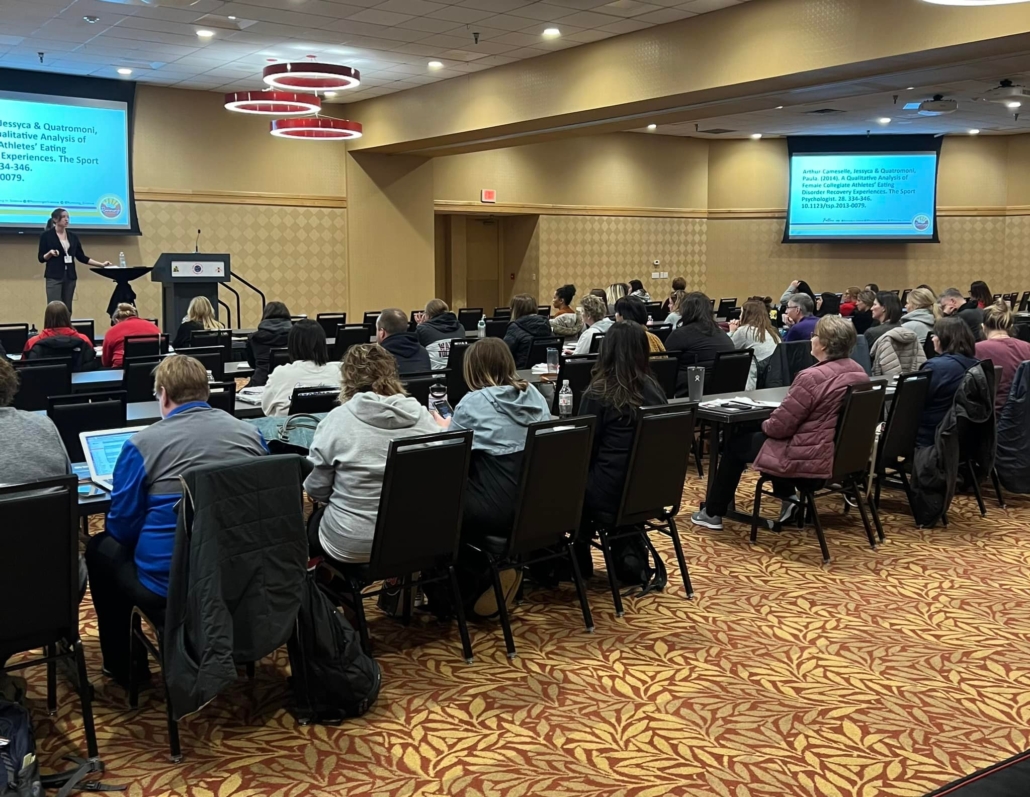 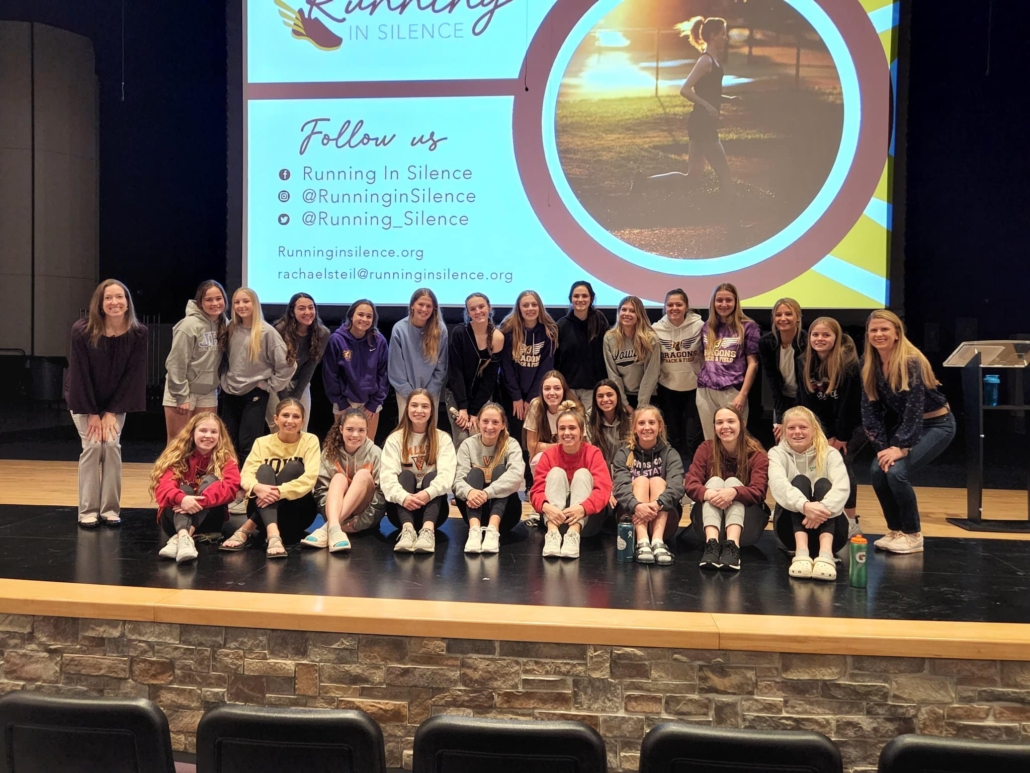 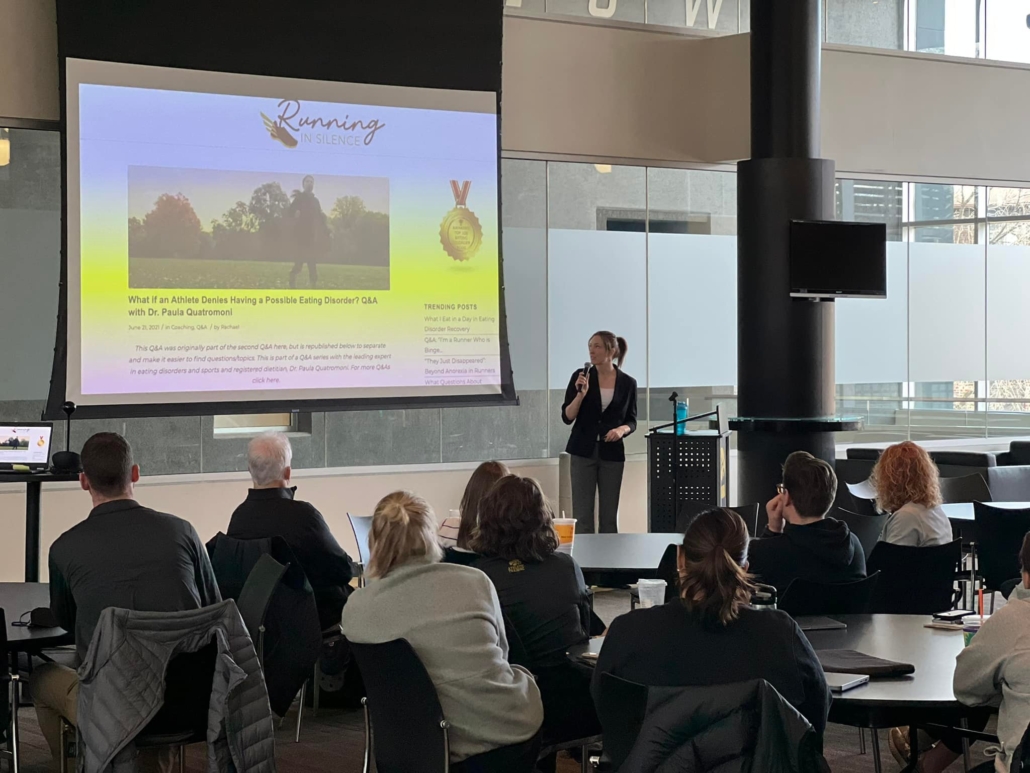 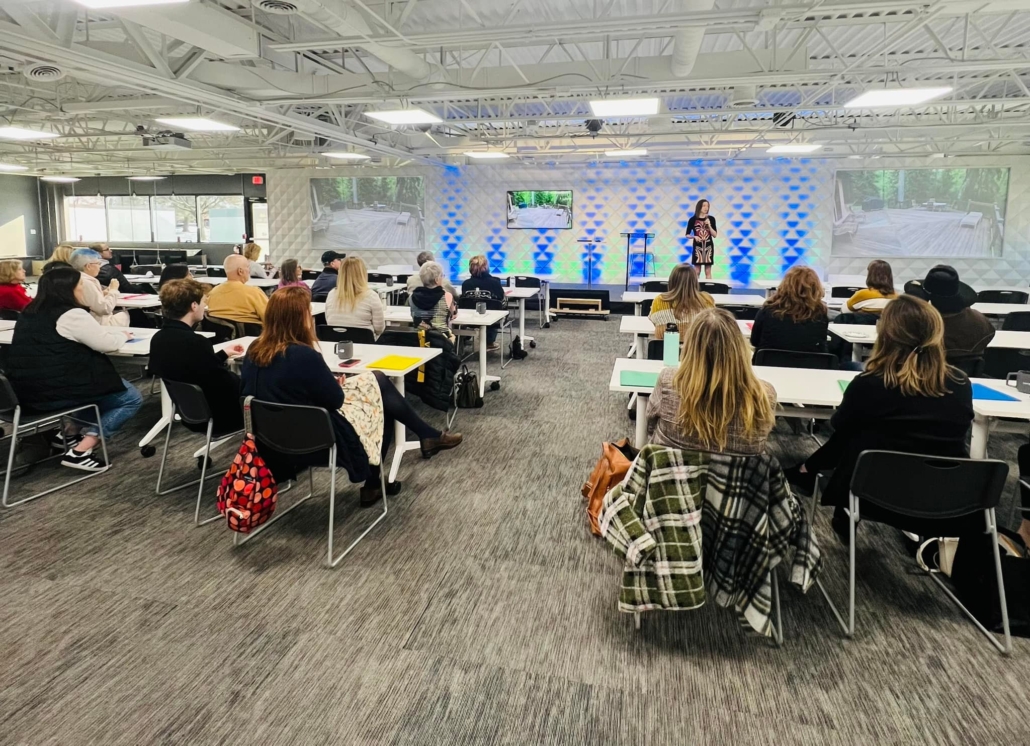 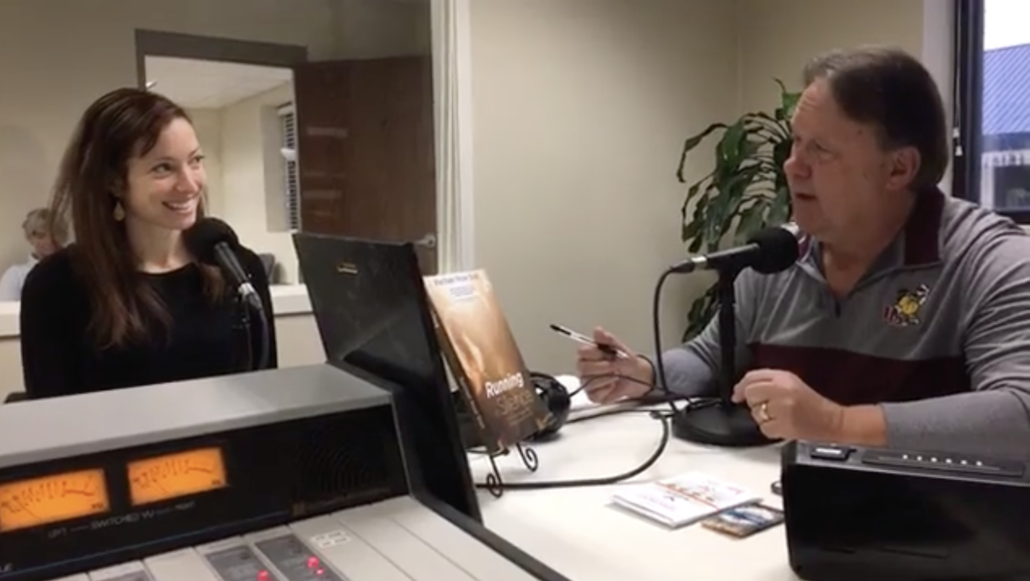 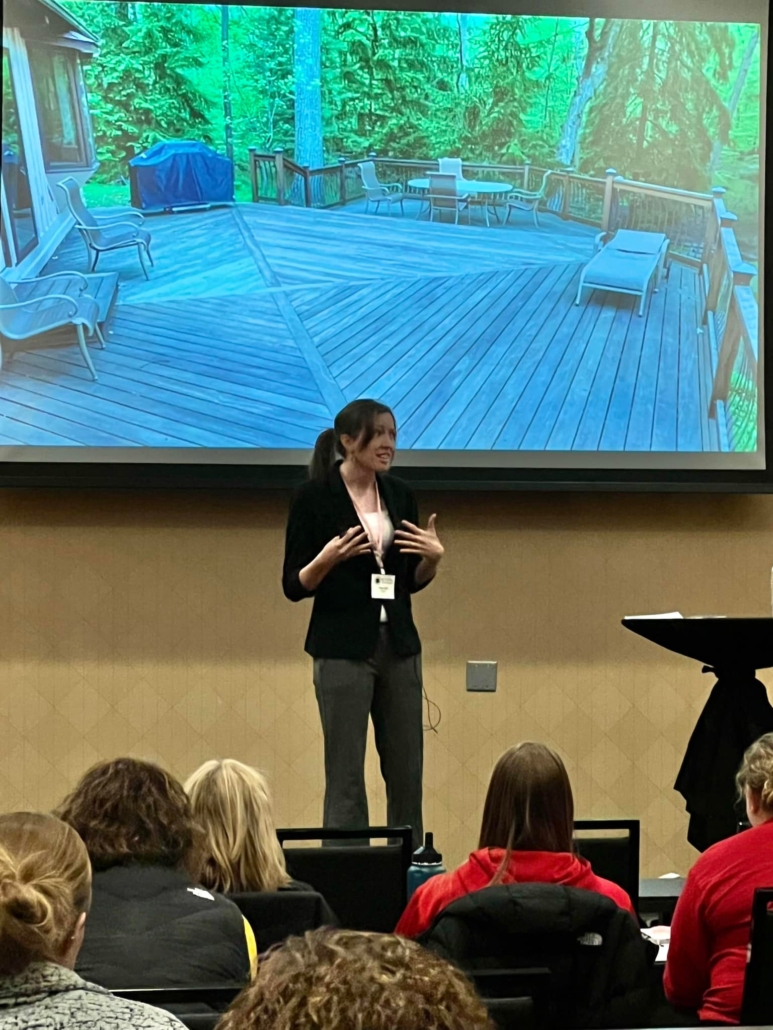 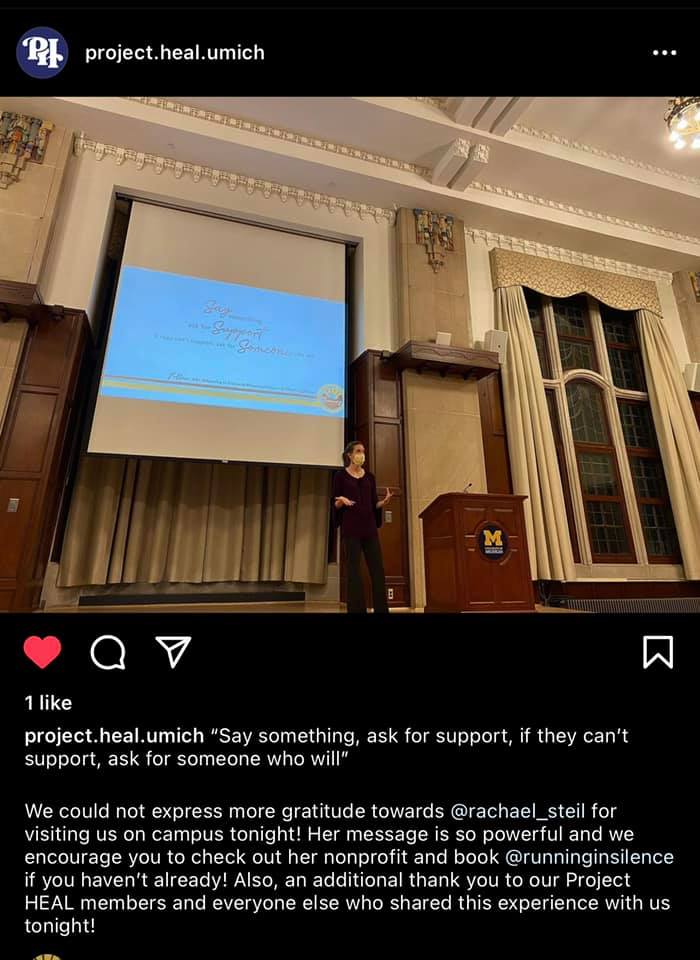 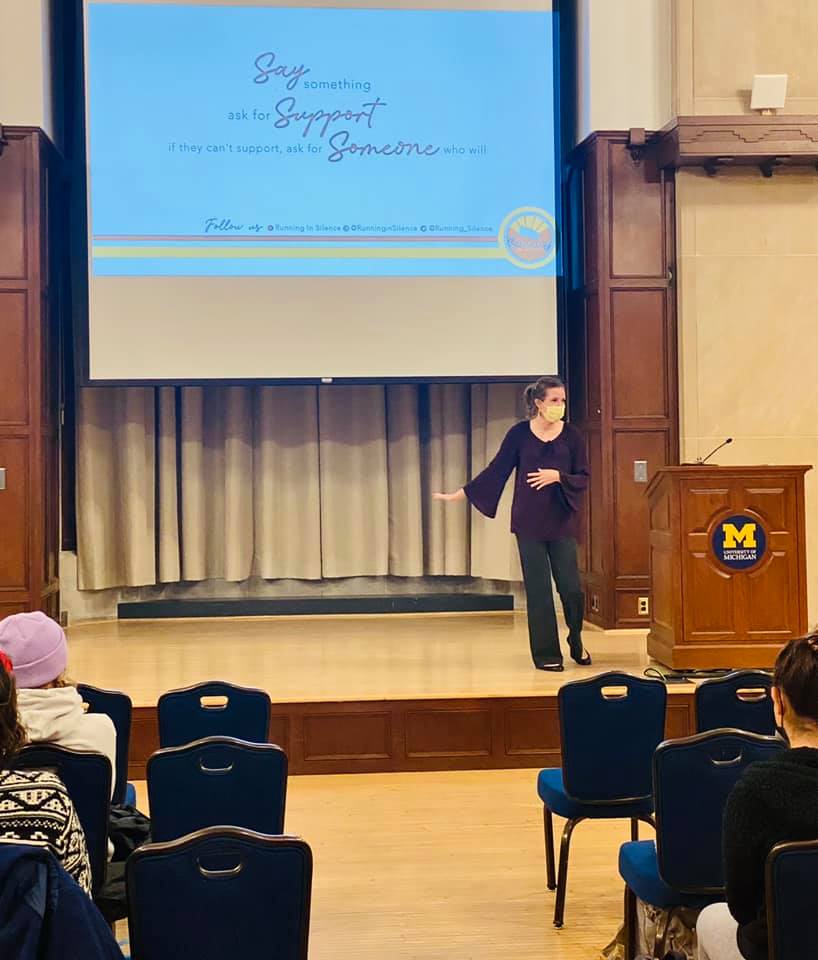 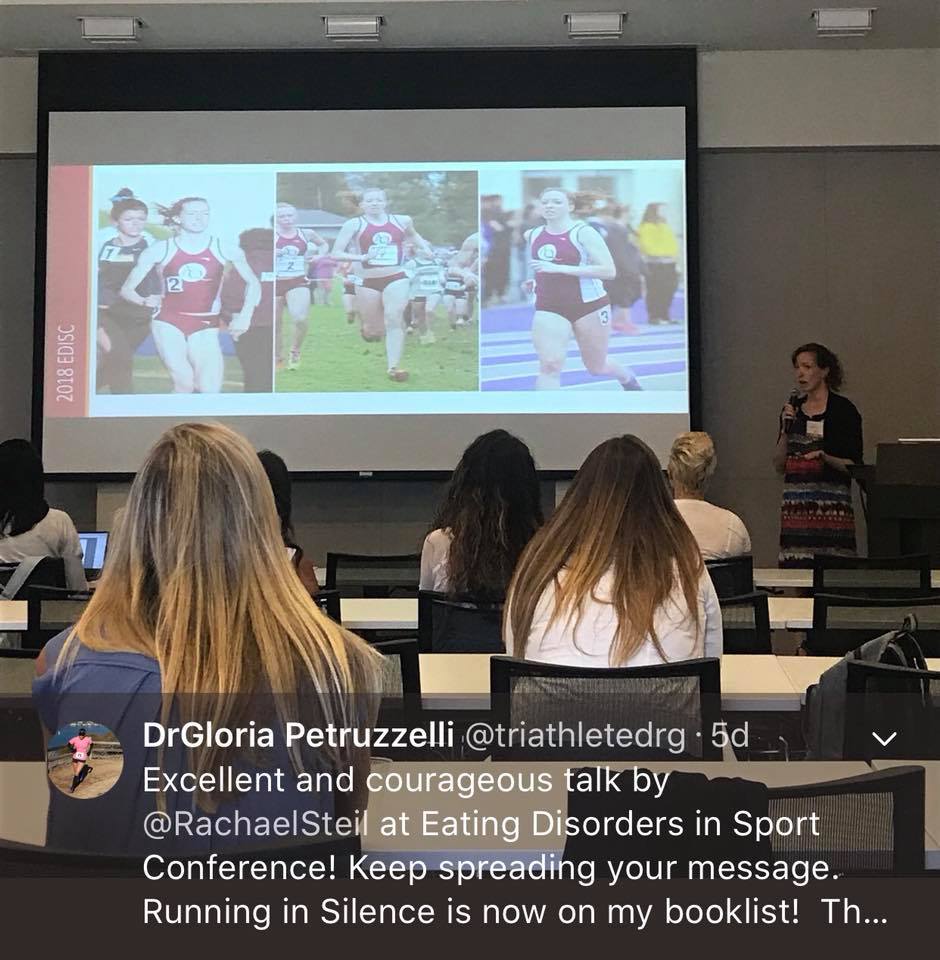 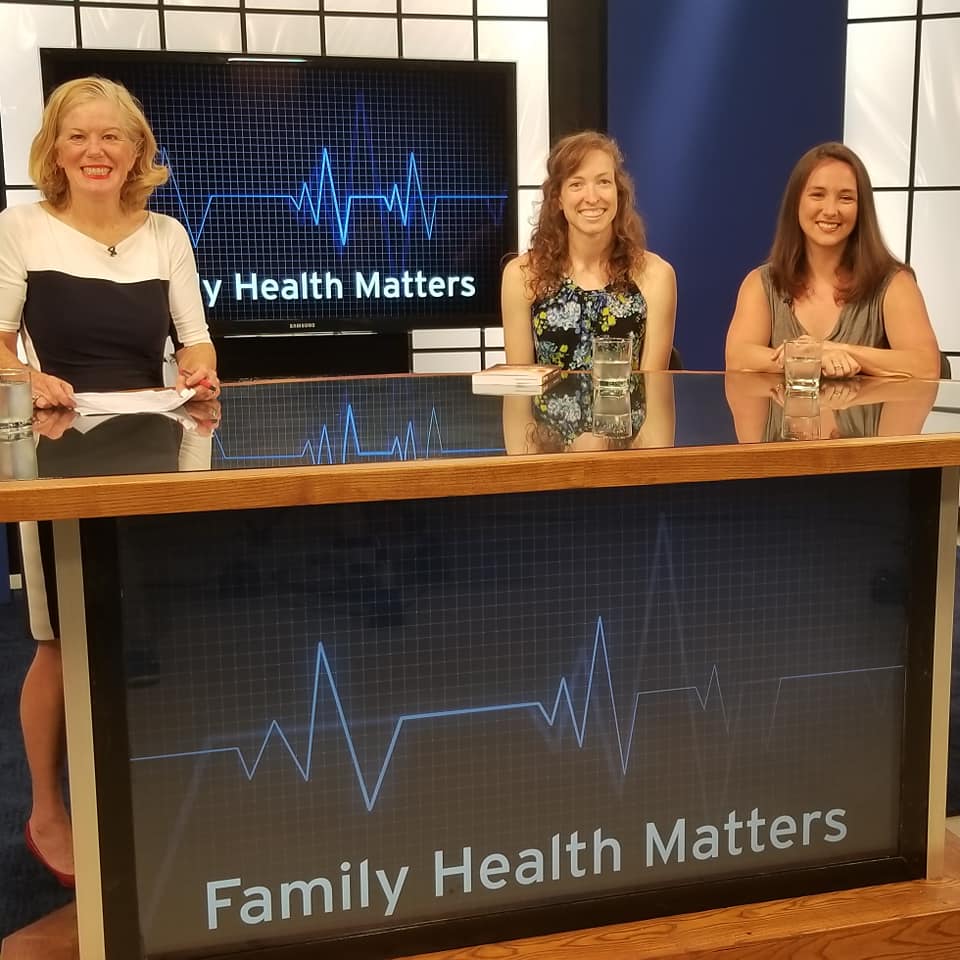 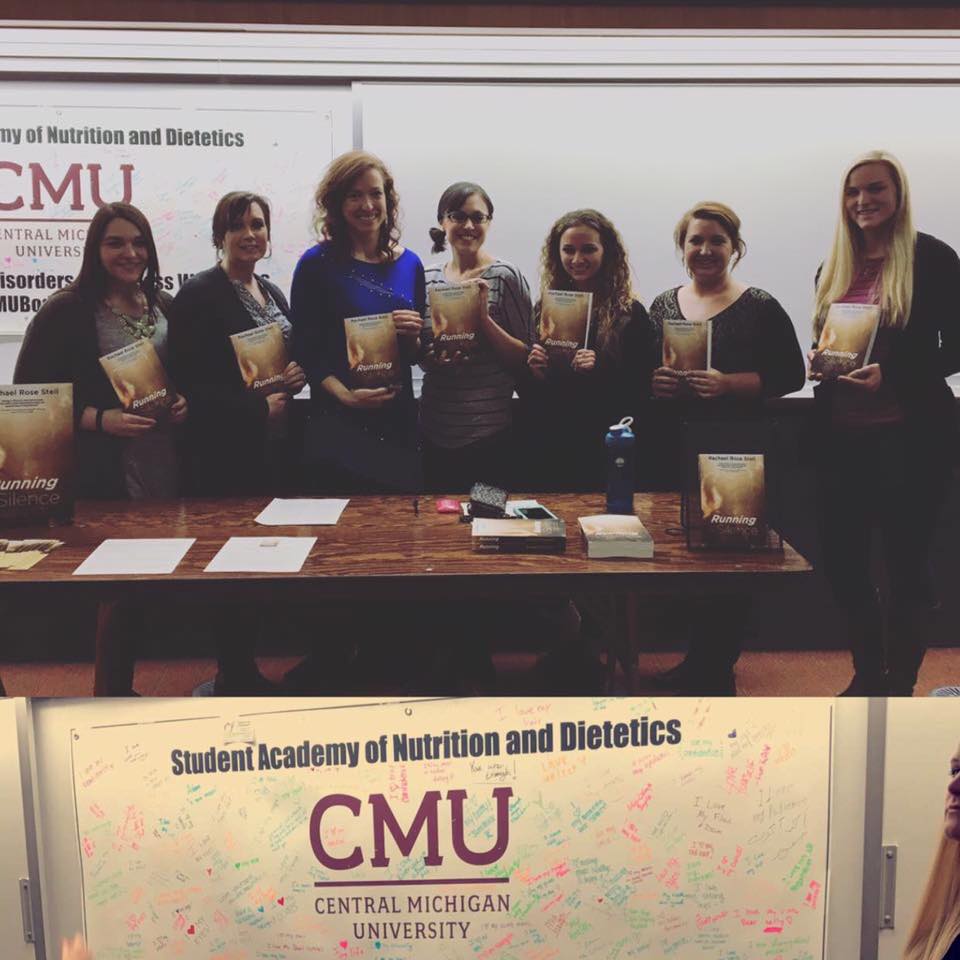 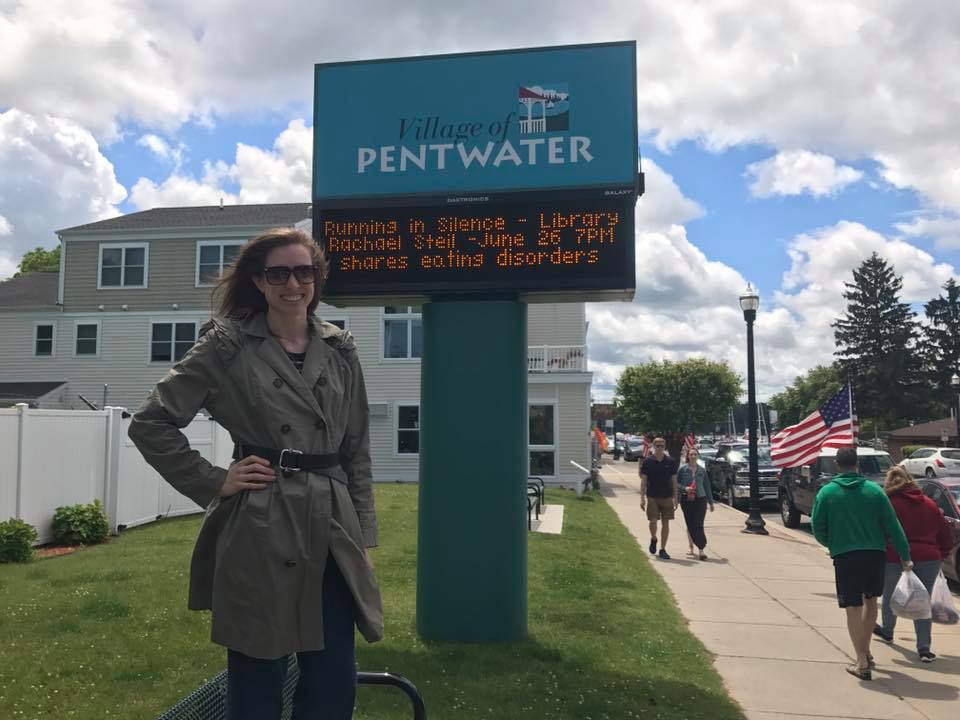 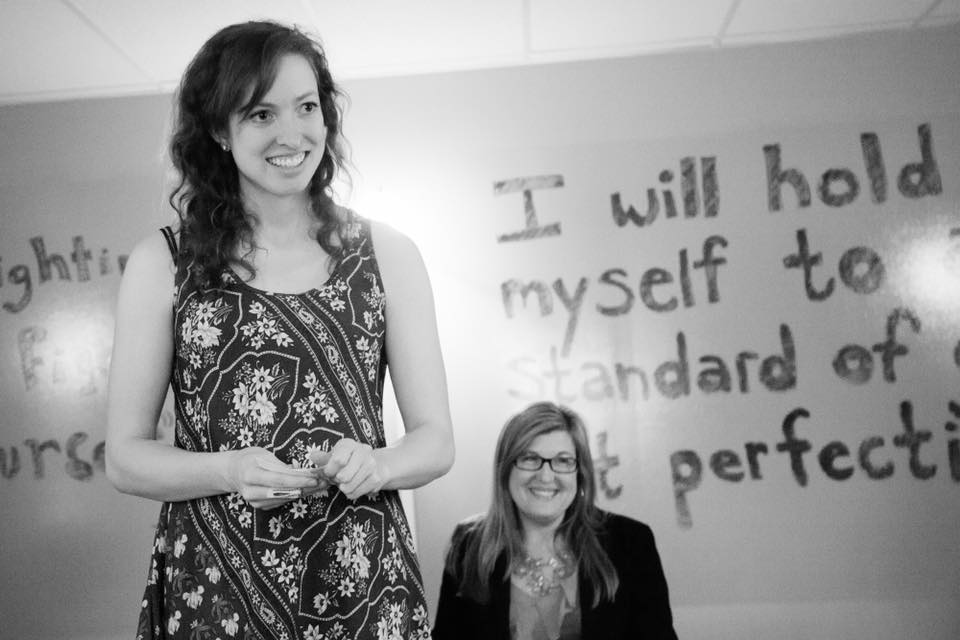 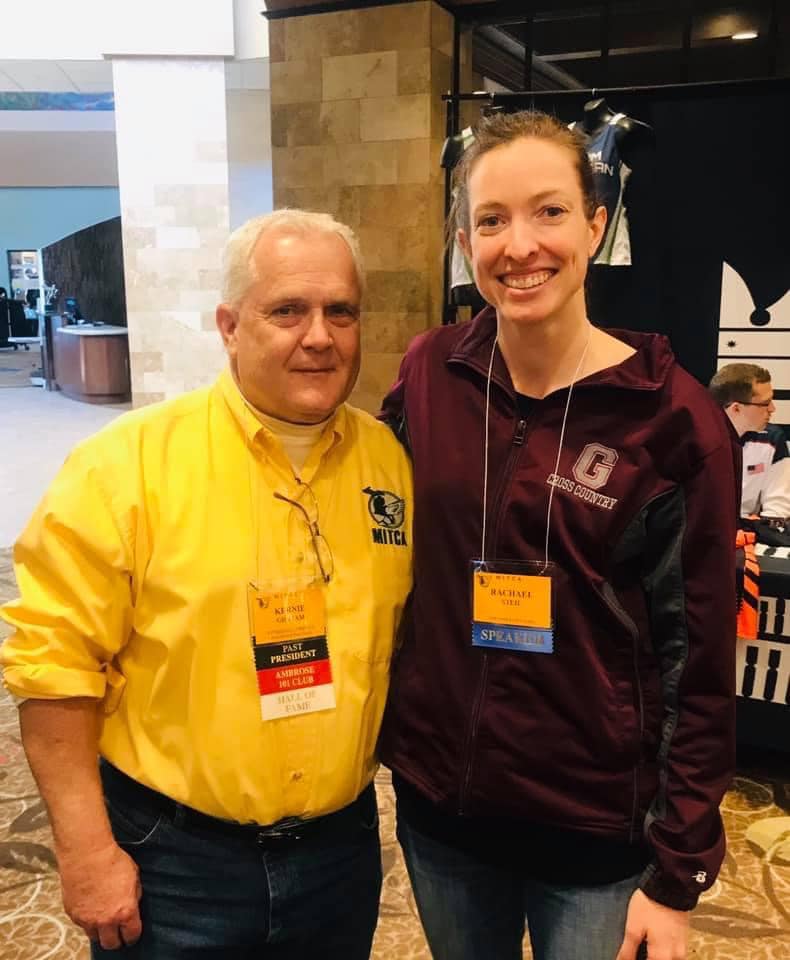 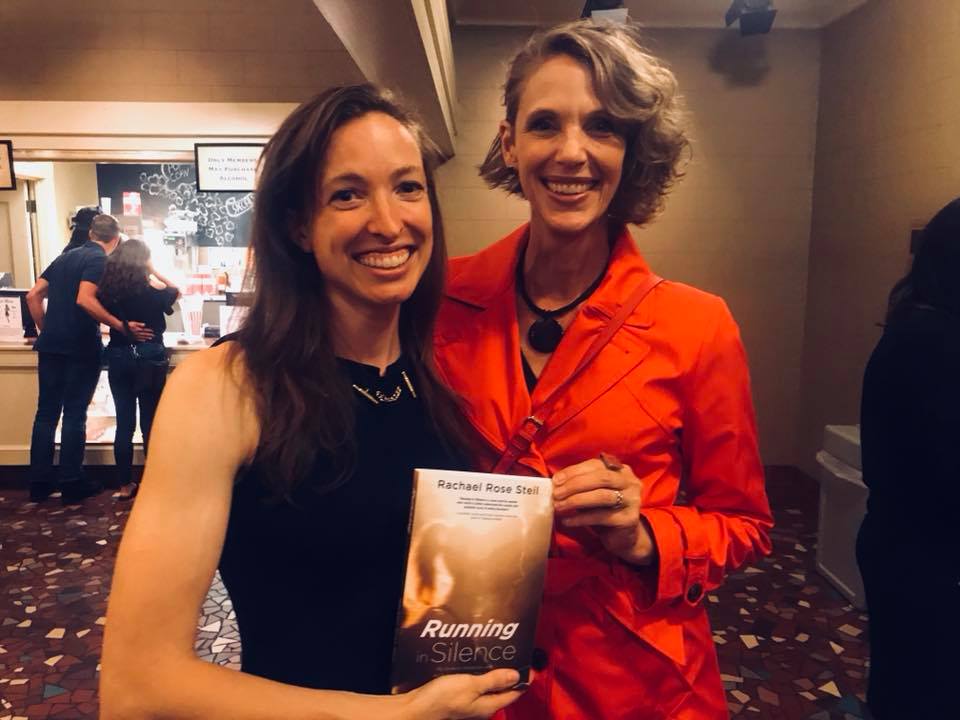 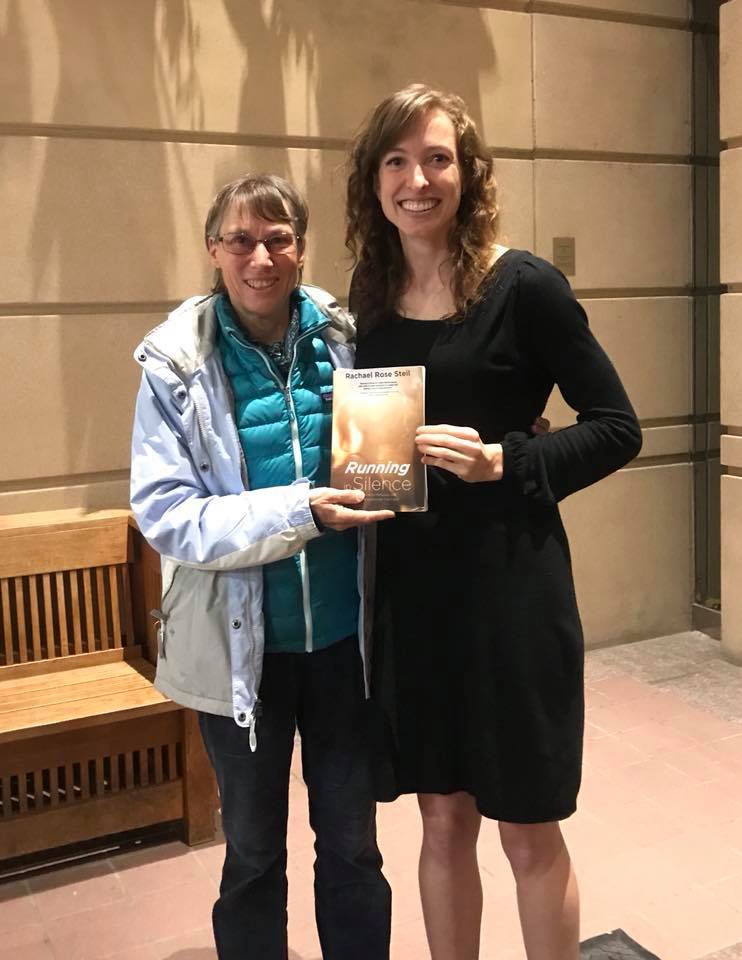 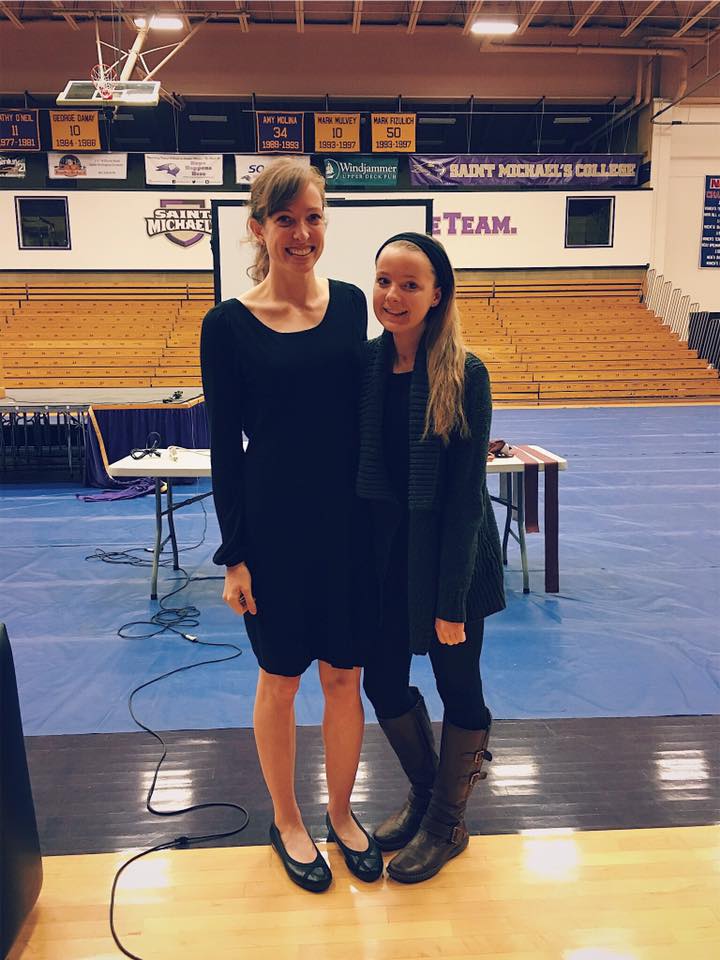 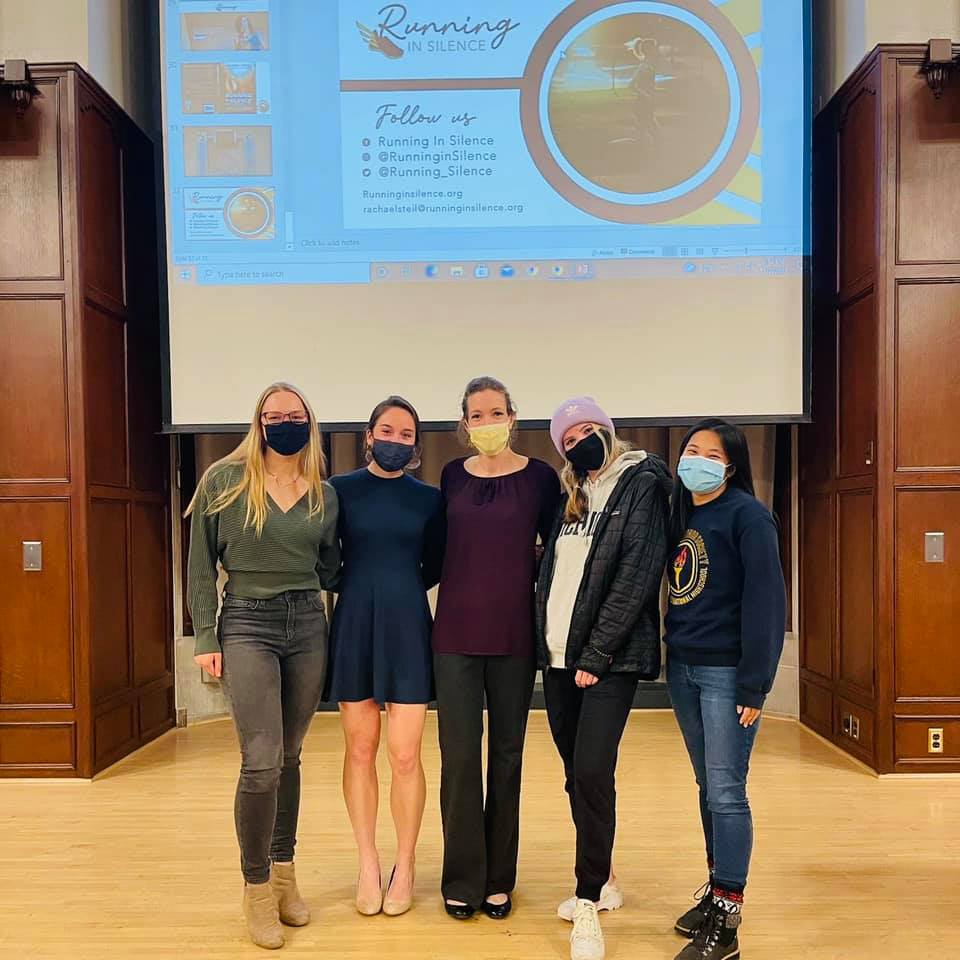 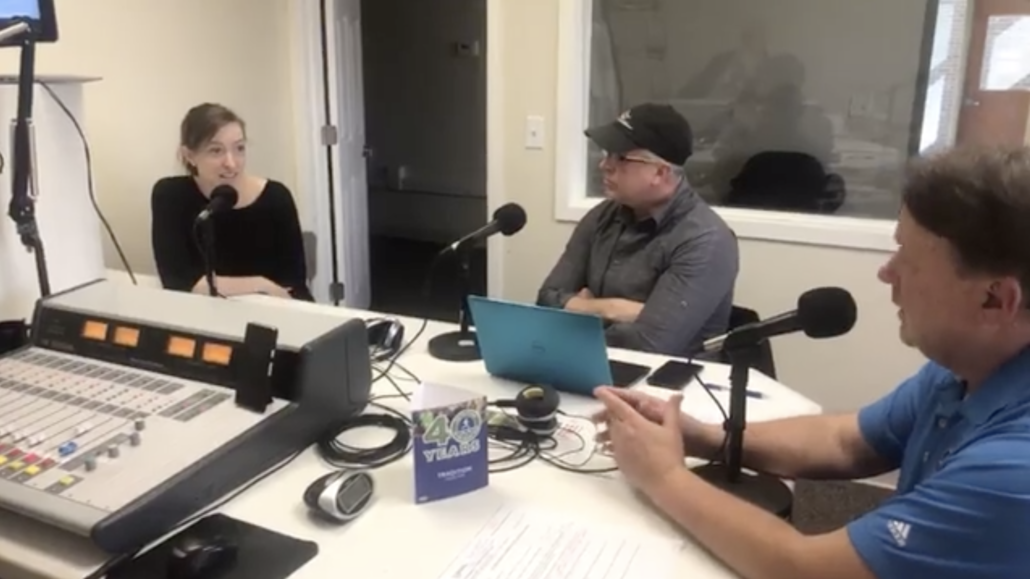 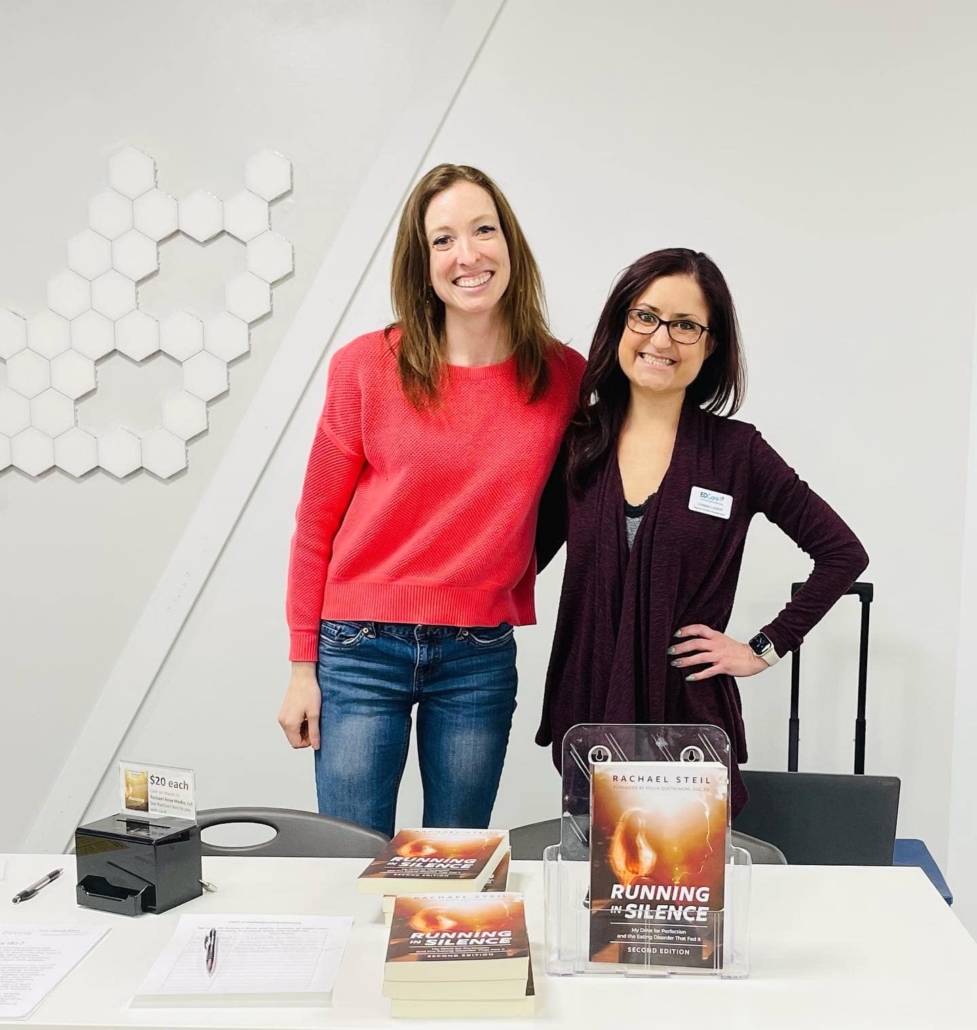 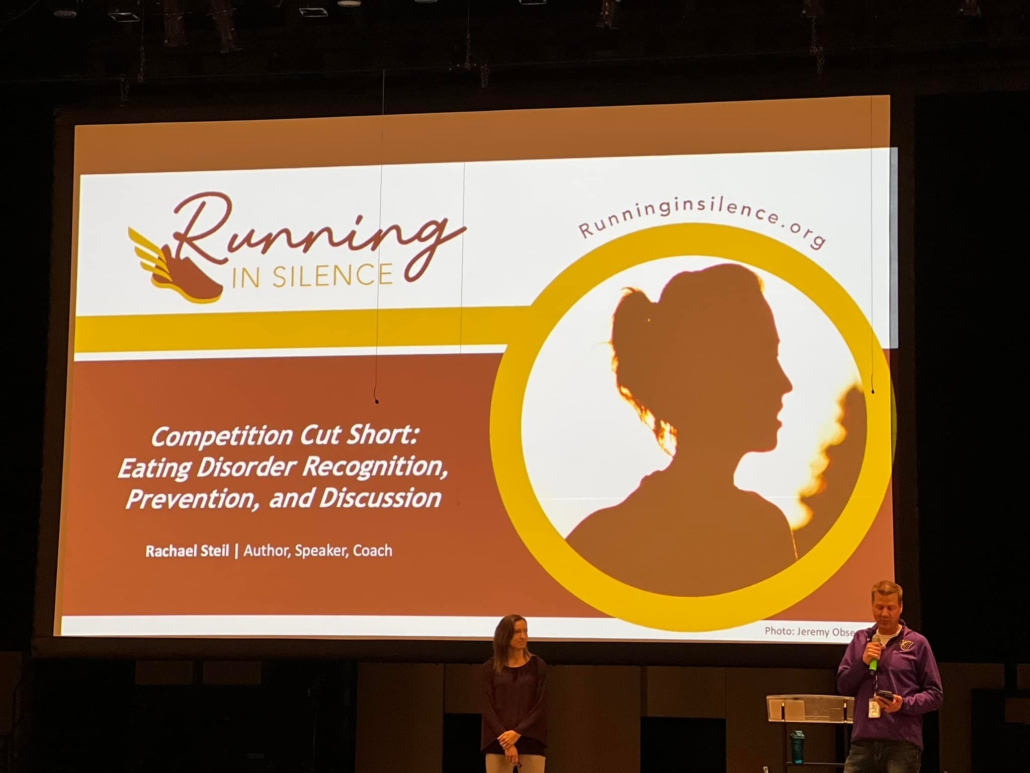 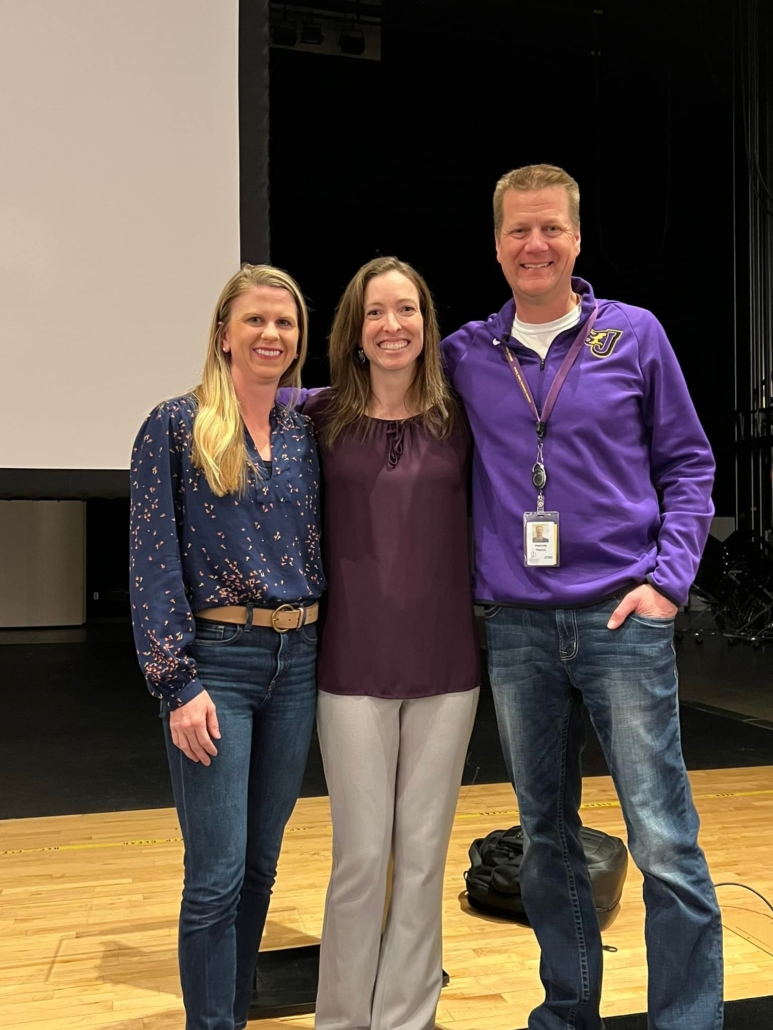 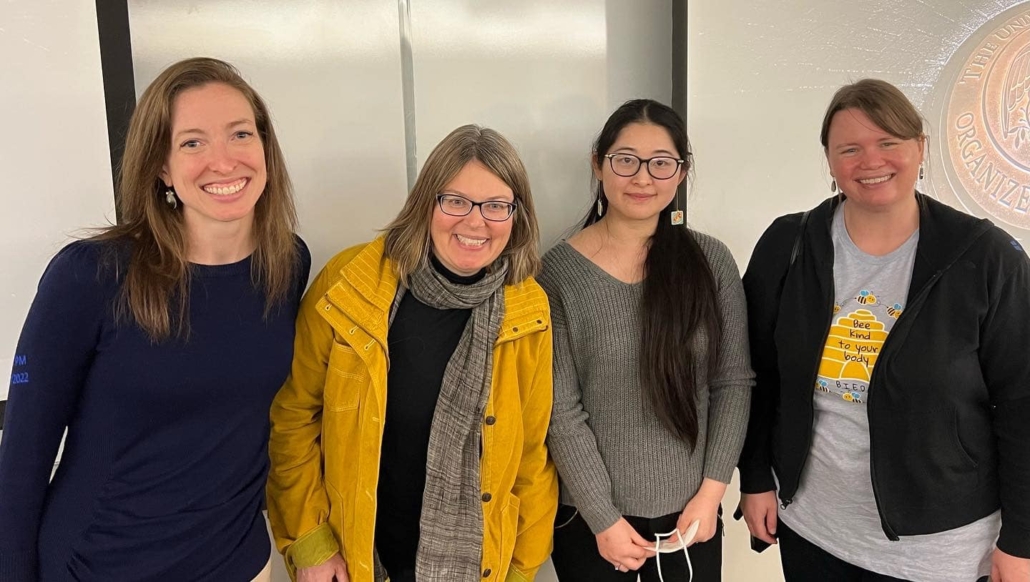 “I heard Rachael speak at our statewide coaches’ clinic, and the effect she had on me was profound. Rachael’s voice should be heard among athletes.”

“Rachael’s presentation was one of the best I have seen here at Saint Michael’s College. Our large audience of student-athletes gave her their full and undivided attention for her entire talk. She also met with our SAAC students at lunchtime and they reported to me just how impressed they were with her and how important they all felt her talk was.”

“Rachael was an outstanding speaker at the MITCA clinic, certainly of great value to all the coaches there. She got rave reviews, as it was so interesting hearing from an athlete on the subject. And when I read her book that night, I couldn’t put it down.”

“Rachael’s willingness to tell the ‘how’ and ‘who’ part of the recovery story is what sets her apart from other speakers and this is what makes her talk different, powerful and helpful. She has done the work to properly target and communicate appropriate messages on this very serious topic to students, parents, coaches, and professionals.”

“Rachael was extremely engaging, inspiring, and easy for our audience (eating disorder professionals, those in recovery and their loved ones) to relate to her struggles. She has done a great job of sharing her story without being triggering to those suffering and inspiring hope in the entire audience. I left feeling that her story is helpful for those caring eating disorders as well as inspiring to those in recovery. I would highly recommend her again!”

Lisa GibsonCo-Founder of the Oklahoma Eating Disorders Association, Registered Dietitian
Rachael leads by her own journey and incorporates the voice that many athletes are scared to share. Let Rachael be your athletes’ voice, as she shares the path and tools that helped her go from helpless to hopeful. Rachael not only dives into the exact topic every coach needs to hear, but she also does it in a way that empowers all coaches to build and prepare to support any athletes coping with eating challenges and mental health. Rachael makes the journey of support accessible for any school, athlete group, or individual coaches.
Sarah HiltonCertified World Speaking Coach & Professional Speaker
PreviousNext

February 18, 2022
Featured on The Hidden Opponent

November 2, 2021
Project Heal of University of Michigan
(underwritten in part by John Wheeler)

September 14, 2021
Mention in Dyestat: What Coaches Need to Know About Eating (Elizabeth Carey)

February 18, 2021
RACHAEL STEIL ON NOT BEING AFRAID TO ASK FOR HELP (Lafontaine Nutrition article)

February 6, 2020
Article: Running in Harmony: How to Tackle Food and Body Issues led by Melody Fairchild and Elizabeth Carey

November 19, 2019
Runner’s World: Coaches Need to Be at the Front Line of Addressing Disordered Eating in Runners

November 15, 2019
“Running Through It” Podcast Interview with Justin Horneker

March 1, 2019
Photo event for National Eating Disorder Awareness week at the Grand Rapids Blue Bridge (lit in the NEDA colors) funded by MiEDA and the Running in Silence nonprofit

December 13, 2018
Vogue magazine article: Is Orthorexia the Eating Disorder for the Digital Age?

October 14, 2018
The Misconceptions and Prevalence of Eating Disorders in Athletes @ Aquinas College

December 22, 2017
“Break the Silence about Exercise Addiction and Eating Disorders”

October 10, 2017
“Toxic Training: How to Recognize the Signs of an Athlete in Trouble” (article)

October 4, 2017
“Running on Empty: Five Women, Three Colleges, and the Disordered Eating That Unifies Them All”
Rachael is quoted in The Riveter about her eating disorder experience and recovery story.

September 11, 2017
“5 Red Flags That Someone May Have An Eating Disorder”
Rachael is quoted in Women’s Running about her eating disorder experience and recovery story.

May 27, 2017
Mental Health Discussion with Running in Silence at Slover Library in Norfolk, Virginia

May 15, 2017
Our Bodies, Our Spirits: Conversations at Park Church

January 19, 2017
‘Running in Silence’ author to sign in Holland
Rachael is interviewed about her book and eating disorder experience

December 15, 2016
Comprehensive Treatment for Eating Disorders presentation and Q&A
Rachael visits CTED to talk with patients about her recovery process and what they can do to strive for recovery.

December 13, 2016
Conversations with Kim Carson: The Story behind Running in Silence

Rachael shares her experiences with anorexia and binge eating in a way that engages athletes from all sports and inspires hope. Her detail of the recovery process and how athletes can recognize struggles in themselves or teammates will inspire many to take that step towards speaking up or supporting those around them.

As a cross country and track coach, Rachael dynamically shares insight into her own experience with an eating disorder, and what coaches can do to help prevent these common struggles and best support their athletes.

Rachael shares her anorexia, binge eating, and bulimia experiences as a runner, the lure of macronutrient diets disguised as “lifestyles”, why eating disorders may appear differently in athletes and what makes it difficult for an athlete to recover, and an in-depth look into what did and did not work in her recovery.