I thought I proved to my body and myself that I could overcome basic human drives, that they were just a nuisance. I thought that thriving only happened through fast performances, running exact mileage, and robotically calculating counting calories.

I had one season because my body proved that I was worth saving.

What they don’t tell you is that your body will take over—that restricting often leads to binge eating. That sudden fast performance with weight loss can occur for only so long until your body screams for release because “wanting it bad enough” will only get you so far.

That the body is smart, and will not be ignored.

Calories in, calories out was simple math until my body told me that math didn’t matter—that it wasn’t going to run on fumes, that food suddenly tasted so much more intense and that my mind couldn’t stop thinking about it in an effort to take back what it had lost.

Your body knows what will keep you alive physically and mentally.

When my coach told me “your health is more important than running as fast as you did before,” I felt the weight of expectation lift. Even though my starving brain wanted to fight back at him and keep the eating disorder, a small piece of my mind shifted. I felt the nudge to pursue recovery, even if I wasn’t yet convinced that it would work.

Perfect math doesn’t do well with a body that is so much more complex and deserves the respect we so rarely give it. I gained more admiration for my body when I realized it was never against me in the first place.

When I took off from the start of one of my last college races, I remembered what it felt like to connect to my body, and my coach reminded me to run free. 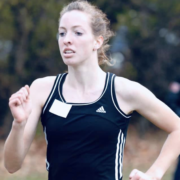 What Can Coaches Do When Athletes are Not Fueling Properly? (Q&A with Paula Quatromoni)

Returning to Competition with Binge Eating