Bringing Up the Past

I often come back to an online running log entry I wrote in 2011. It was read by an opposing team (Ahhh, when you learn how find-able anything you put on the internet really is!). I was so focused on the story-telling part of writing about the race, that I hadn’t thought about who I could hurt by writing harshly about the competition. I also sounded like someone who thought she was a total badass (I wasn’t).

At the time of the race, I thought I had the control of food on my side. I thought I had found the Holy Grail of success–restricting food and perfecting it. I was running times I had dreamed of running and was beating people who used to float away from me.

I wrote about how powerful I felt, gearing up for the competition, and how rowdy the race was from the start when I heard a “smack” behind me. One of my competitors had fallen at the start, and, wanting to convey the intensity of the race, I wrote: “1 down, 24 to go.”

It came off poorly. It was the wrong way to write about it. It ended up hurting other runners (in fact, a whole team) who had been affected by this incident. I spent an entire day after its discovery by this team apologizing for it and feeling dirty.

That past Rachael, as innocent as she felt she was, had a lot to learn.

I had tested the limits of writing and found how damaging it could be. Running so well at that time also got to my head. I loved that sense of power. It felt like “revenge” for all the years I felt I had never been “enough” in running no matter how hard I pushed myself or trained.

Intentional or not, words (verbal and written) can do a lot of good or they can get you into trouble. One of the difficult parts of writing is you’re often waiting to see how readers interpret the writing. Even if you say you didn’t mean for it to come off a certain way, the writing speaks for itself.

I’ve become so aware and hyper-sensitive to how I write anything these days. I have seen, even in the two years since getting Running in Silence published, how I want to improve the book. It still doesn’t take away the cringe factor when you’ve learned what you’ve learned and wish things differently years down the road. And when what you wrote has already been written and published, there’s no changing it now.

Luckily failure hasn’t paralyzed me. Two years from that running log entry gone wrong, I put myself out there again and started this website. My writing was not perfect, but I kept trying and working to understand myself (and others) and gave it a shot.

Even as I’ve gone on to publish a book, I still see many areas where my writing has failed. I see all the mistakes rather than the important conversation Running in Silence has started. I’ve realized that it becomes more selfish to think of what is imperfect. And in the end, it’s not about me, but about the message and what good that can do. As my good friend and fellow author Veronica Kirin recently stated, “It is better to get something out into the world, to see the sun, and to start learning from experience than to leave your ideas in the darkness of perfectionism.”

I have failed many times. I’ve lost some confidence along with that, and I’m sorry to those I’ve hurt.

I like myself so much more now than I did back then because of what I’ve learned. I am humbled, kinder, less judgmental, and more sympathetic. Maybe going through something like an eating disorder and traumatic physical injury will do that to you. I needed a wake-up call, and those experiences were it.

I left the stage at Failure Lab, finally distant enough from my failure in food and running to understand that perfection is boring, lonely, and unattainable. Most of all, it’s not realistic. I was a fool to think it was something that could be attained.

As a writer, I now see that no failure makes for bland, boring writing. There is no great happiness and accomplishment without great heartache.

I try to call myself an “imperfectionist” to reduce the fear of failing. As long as I’m learning from my experiences, I’m putting my mistakes/failures to use. I want to put more energy into what I’m doing right, and learn to just take the lessons away from what I’ve done wrong.

I can make the dark side of life work for me, not against me. 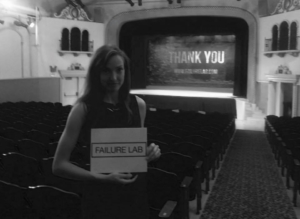 The Process of Eating Disorder Recovery Conversations with Coach: The Rollercoaster of Running with an Eating Disor...