Donate to her Running in Silence marathon journey fundraiser here!

My eating disorder and running goals had me focusing on one common thing: how to be less. How I could spend less time on the cross-country course or track? Eat less throughout the day? Weigh less on the scale? And take up less space in this world? These thoughts of how to be less took up most of the space in my brain. It seemed the better I got at running, the more mental space was taken up by these goals.

This hyper-focused mindset, in addition to the irritability that came with under-fueling, made it difficult for me to form meaningful relationships and spend time with the ones I loved.

Looking back at the time I was struggling the most with my eating disorder, I can now identify several ways my social life and relationships were impacted: 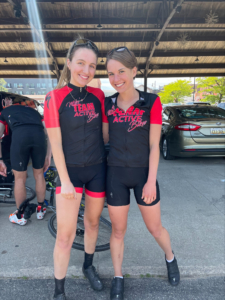 It wasn’t until my freshman year of college that I realized how much my eating disorder and fear of food ruled my life. Like most freshmen, this was my first time living on my own. In addition, it is an opportunity to establish deep connections that last throughout college, if not a lifetime.

I was lucky. I had what many would consider a “built-in friend group” on the team at Michigan State University. We did spend most of our time together whether it was at practice, in the dorms, cafeteria, or study hall. While I was grateful for this camaraderie, I missed out on a lot of opportunities to get to know my teammates as being more than runners for my first year of college.

I don’t think I went to a single ice cream outing. I frequently skipped out on movie nights at the older girls’ houses. At practice, I was there to run and compete. It felt like most days, I didn’t have the energy to think or hold conversations. By practice time, I was so hungry that I just simply wanted to get through the run so I could go to dinner.

Beyond Running and Restricting

About halfway through my freshmen year, I began to feel very down. It appeared as if I had a limited number of friends and nothing going for me besides running. I didn’t know what else I liked to do besides running and school. This was the moment I realized just how much of myself I had lost to my eating disorder.

I vividly remember calling my parents in a side hallway of Case dining hall in the winter. Tears were streaming down my face as I wrapped my arms around my knees. I remember apologizing for being so irritable my senior year of high school and thanked them for all their support.

How did I get here? I used to like to paint, read, write, ride bikes, play basketball. I hadn’t done these things in years. I remember feeling angry at running for taking these things from me. I desperately wanted to feel like myself again.

It took some time for me to work on my relationship with food and challenge myself to try new things and be more present with those around me. It wasn’t easy, but I am very grateful I came to this realization so early in my collegiate running career.

I started reaching out to teammates the winter of my freshmen year. I tried to catch up with as many people as possible that summer. This was hard. I had been living in this “shell” for so long. I doubted my social skills and often worried if people would like me if I started being myself.

It was that fall that I started dating my boyfriend, Matt. He had reached out to me on social media the summer between my freshmen and sophomore year of college. I remember feeling so nervous to talk to him over text. How was I going to have a real relationship?

I was so nervous but continued to push myself out of my comfort zone, agreeing to go on a date with him once we first returned to campus. One date led to another and before I knew it, I not only had a boyfriend, but also a best friend. Not only did he help me find balance in my life, but he was the first person I opened up to about my struggles with an eating disorder. He showed me nothing but love and support. 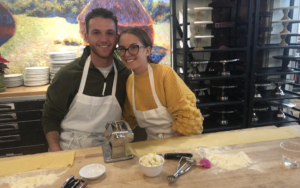 The relationships that I made with my teammates and Matt energized me. I realized I needed to take care of myself to be fully present and my best self for those who needed me. This included giving my body the energy it needed to thrive.

Nourishing my body with enough food benefited my relationships in two ways. First off, I no longer felt angry all the time and had the energy to do things outside of running. In addition, I was no longer preoccupied with food all the time. This freed up my mind to connect with others, ask them questions pertaining to their lives, and carry on a meaningful conversation.

I’m not going to sit here and pretend that I don’t have bad days. There are days that I struggle with my body image. There are days my restrictive eating disorder thoughts creep up on me. And there are days where I question my decision to close the chapter on my collegiate running career to focus on my physical and mental health. However, in those moments I remind myself to slow down and look around at the life I have created for myself: moving across the country, my relationship with Matt, the countless friendships I have been able to foster over the years, and the new things I have learned about myself. Then, I am reminded it was worth it.