There are a tremendous number of people have been with Running in Silence since its beginning 7(!) years ago, and even more-so now as a 501(c)3 nonprofit. On this Giving Tuesday, I want to acknowledge everyone who has given their time, donations, and efforts to support!

When I first posted on this website, my very own college coach Mike Wojciakowski immediately expressed his support. He was willing to work with me through my recovery as I continued to run for the team. He was even one of the first to offer a place for me to speak on this subject at RunGR!

Lize Brittin, author of Training on Empty (the book and blog) began her eating disorder recovery advocacy work in 2009. She has been nothing but supportive since the beginning of my own endeavors with Running in Silence and continues to be a very important voice in the athletic eating disorder community!

Strong Runner Chicks and Founder Megan Flanagan reached out a few months after I started the runninginsilence.org website, and we discussed ways in which we could talk about eating disorders in sport. She has since helped to share Running in Silence while ramping up things with SRC!

Kernie Gilliam of MITCA was the first to bring in the Running in Silence presentation to coaches. To say I was nervous on that day is a big understatement. It was the first time I was reaching an audience I’d been working to reach for months (if not years), and it was a packed room. This led to connecting with Jay Ivory of the ITCCCA clinic, who also brought me in to speak twice. Each presentation has been a game-changer for me and many who attended and expressed that this needs to be a topic at all coaching clinics. 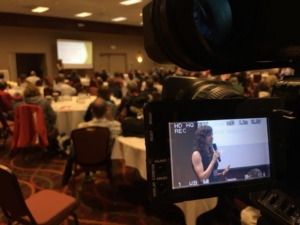 I am especially grateful to Larry Figurski for putting together a video segment for WoodTV about my experience with an eating disorder as an athlete and coach, and what I’ve done with Running in Silence – link here.

Paula Quatromoni, leading eating disorders in sports expert, took a chance on me when we met at the McCallum Place Eating Disorders in Sport conference in August 2017 when I was working to bridge the gap between the athletic community and the eating disorder professionals. After she took the Running in Silence book home to read, I reached out with questions and she had the answers–very enthusiastically! From there, we took off with the popular Q&As for coaches, athletes, and parents, found here.

I can’t forget to give a shout-out to the Capital cross country team, who spoke about Running in Silence and raised awareness for eating disorders in sport at their very own cross country invitational in the fall of 2018! As well as sports RD and author of Finding Your Sweet Spot Becca McConville who has supported Running in Silence throughout the years.

I am especially grateful to our donors, including Steve Prawdzik who has also brought me and others with eating disorder experiences onto The Sports Project Radio show multiple times, and John and Jason Wheeler for their tremendous financial support to fund speaking engagements in the previous year and into 2020.

I’m so thankful that Runner’s World connected with me for the article we put together a few weeks ago to follow up on the Mary Cain and Nike Oregon Project situation, and what our athletic community can do to make important changes: Coaches Need to Be at the Front Line of Addressing Disordered Eating in Runners

An additional shout-out goes to some of the colleges/universities who brought in the Running in Silence talk in recent years: Boston University, University of Rhode Island (Kingston), Saint Michael’s College, Aquinas College (multiple times!), University of New Hampshire, West Shore Community College, Penn State Behrend, the NCAC (our first webinar!). These presentations have begun the funding of Running in Silence, and have reached athletes who needed it.

And finally, I’m thankful for the incredible Running in Silence board members who have offered important insight, suggestions, and guidance. This includes Greg Meyer (last American to win the Boston Marathon until 2014), Paige Boldt (2011 Ferris State graduate and collegiate runner, previous Aquinas assistant coach), Greg McAleenan (President of The Locker Room and McAleenan Management Group), and my parents Dave and Tamara Steil who have supported this venture from the moment I spoke up about my own experiences.

If you’re thinking supporting on Giving Tuesday, we would appreciate any contribution (tax deductible) to Running in Silence to help inspire and encourage more education around eating disorders in athletes: https://runninginsilence.org/make-a-donation/. Or if you have ideas, would like to schedule a speaking engagement at your organization or event, or want to contribute in any other way, please don’t hesitate to contact us here!

This kind of education and awareness around eating disorders in sports is a dire need that has not been fully met, and we are thankful for the support we have received to help bring this to light.